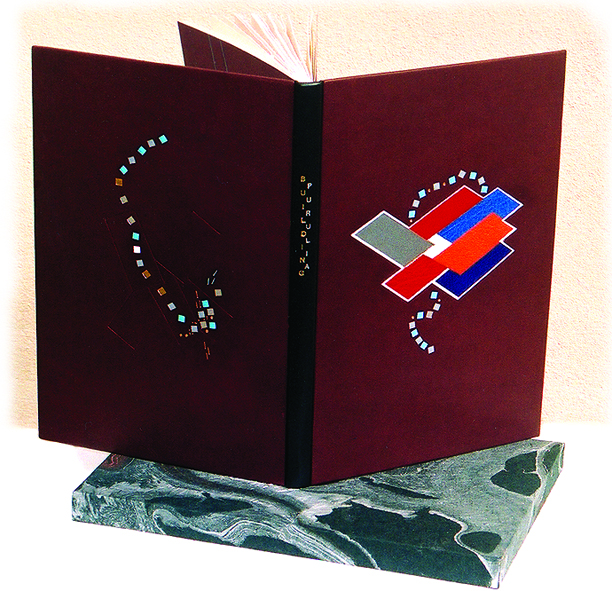 Building ‘Purulia' (1982) was the Guild’s first and most adventurous publishing adventure.
Ralph Lewis recalled: “In May of this year (1982), a weekend exploratory journey was taken to the Far South Coast. Twenty one went, and the happenings of that weekend formulated a clear guideline for the creation of this book. At a memorable dinner at the Hotel Cobargo on Saturday evening May 29th., it was decided that the Guild would produce this volume according to the finest craft traditions.”(1)

The essay, Building ‘Purulia’ by W. Hardy Wilson, was chosen as the text for this adventure. It was first published in 1919 in Domestic Architecture in Australia, a “special number” of Art in Australia, and explores the rationale that led to the designing and building of his own home, ‘Purulia’, in Wahroonga in Sydney’s Northern Suburbs.(2)

Printed by Jim Walker off handset type at The Croft Press on paper handmade by Alan Walker at the Bemboka Handmade Paper Mill, the edition ran to 200 numbered copies with a further 10 ‘out of series’ copies. The unbound sheets were available to Australian Guild members for binding.

A binding competition was organised. In “On Reflection: The Building ‘Purulia' Competition” Keith Turnell wrote: “The binding of ‘Purulia’, by the intrepid Guild members, proved to be an exercise in self discipline that will earn dividends in binding education, and confidence… The ‘Purulia’ binding, from most comments, was not an easy book to bind. The nature of the paper stock, the printing and the number of sections (4) provided the initial planning problems… I was pleasantly made aware of the talent of the intrepids who produced such a variety of ideas which suited the Hardy Wilson topic.” (3)

The winner of the competition was Neville Daniel. His letter of acceptance was published in Morocco Bound. (4)

Of the binding process, John Newland recalls, “the paper was a bit of a bugger for binding as it was so brittle.” Adding, “we had a ‘busy bee’ gathering to bind several copies into books for sale. Keith Turnell led the working party including the making of the hand-decorated end papers.” (5)

Three exhibitions of the bound books have been organised. The first, an exhibition of the competition bindings, was in March, 1983 at the University of Sydney’s Fisher Library. Twenty years later in May 2003, thirty-three of the bindings were exhibited at ‘Eryldene’ (6), a house in Gordon co-designed by Hardy Wilson. This exhibition, Purulia, was organised by Paula Bloch, then president of the Guild. Later that year, with the title One Book, Many Bindings, 50 bindings were exhibited at ‘Tusculum’, The Royal Australian Institute of Architects in Potts Point, Sydney. Seventeen additional bindings had been painstakingly tracked down by Sabine Pierard of Bookbinding Exhibitions Australia. (7)

There are several copies of the bound book in the NSW Guild library. There are also copies of the catalogues from 2003 exhibitions. The catalogue to the exhibition One Book Many Bindings is fully illustrated and gives a glimpse at the variety and innovation of designs and bindings styles used by the binders.

John Newland completed the typesetting and layouts for printing. The bookblocks were printed in Drummoyne on Spicers Paper Industries, Ltd, 118 gsm Gilbert Oxford Text recycled paper supplied by the Guild. The Guild also shouldered the printing costs. The print run was 500 copies.

John Newland remembers: “It wasn't a great financial success and there were many unbound sheets left over. During the 6-week closure of the workshop due to the building renovations [at Garry Owen House], the storage conditions (as the Guild had to vacate the room) were not all ideal and many of the unbound sheets went mouldy and had to be tossed out.” (9)

Packaged binding kits were put together to sell and send out in a post tube. The kit included the bookblock, all the binding materials except cover card, and instructions on how to collate the sheets and bind the book using the materials provided. There are still unbound copies available.

Harrild & Sons Illustrated Catalogue of Bookbinders’ Machinery, Materials, Rolls, Tools, Corners Etc. This catalogue was originally published in 1892 and re-published in 1988. The acknowledgement reads: “This is a photo reproduced reproduction arranged by The Guild of Craft Bookbinders and produced with the assistance of staff and students of the School of Graphic Arts, Sydney Technical College.” The catalogue is a wonderful insight into a particular period in the mechanisation of bookbinding. The machines are like strange monsters, their form dictated by function. There is only a set of proof sheets and no bound copies in the Guild library.

Practical Bookbinding (No.7 Marshall’s Practical Manuals), W. B. Pearce, London Percival Marshall & Co, 1935. The subtitle reads: A Text-Book intended for those who take up the Art of Bookbinding, and designed to give sufficient help to enable handy persons to Bind their Books and Periodicals. What a lovely invitation to take up bookbinding! The book was re-published in 1992 also with the “grateful assistance of the staff and students of the Graphic Arts Section, Sydney Institute of Technology, Ultimo”. There are still unbound copies available.

Modern Bookbinding: A treatise covering both letterpress and stationery branches of the trade, with a section on finishing and design, Alex J. Vaughan, Charles Skilton Ltd, London 1929.  The publication was laid out in A3 sheets to be folded and collated by the binder. It was printed by photocopy in 1998. There are two bound copies in the Guild library.

Michael Mathew recalls: “The Harrild’s catalogue was my idea. I was visiting a fellow in Redfern as I recall who was selling off some materials and he had the catalogue and allowed me to copy it.  I remember working with Rowley Corbett on both the Pearce and Vaughan. The fold out page on Vaughan was a challenge to make sure it wasn't cropped when guillotined.” (10)

With these publications we see the vibrancy and commitment of the NSW Guild, the committee and members, to the craft of hand bookbinding. Also captured in this series a publications is a history of printing technologies from handset letterpress to photo-lithography to photocopy. No doubt any future publications will echo the digital times we live in.

Many thanks to John Newland, Michael Mathew, John Turner, Adrienne Allen and Margaret Scott for their input into this piece.

2. p.9 Hardy Wilson W. “Building Purulia’” in Domestic Architecture in Australia, Art in Australia,  1919, Sydney. The publication date of this article is recorded in One Book, Many Bindings as 1921 which is incorrect.

6. In Domestic Architecture in Australia the name of this property is recorded as ‘Eryldoun’